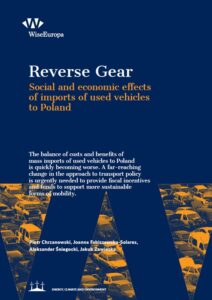 The balance of costs and benefits of mass imports of used vehicles to Poland is quickly becoming worse. A far-reaching change in the approach transport policy is urgently needed to ensure fiscal incentives and funds to support more sustainable forms of mobility.

The policy brief can be accessed at the following link

REVERSE GEAR. SOCIAL AND ECONOMIC EFFECTS OF IMPORTS OF USED VEHICLES TO POLAND